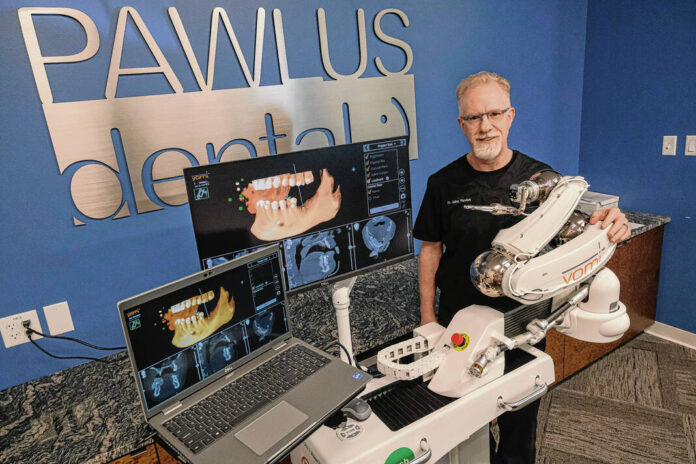 A Columbus dentist has become the first in Indiana to use a new robotic system to help place dental implants in what he hopes will become an industry standard of care.

Dr. John Pawlus of Pawlus Dental, 4001 W. Goeller Blvd., said he’s been using the system, known as Yomi, since June and has placed about 60 implants since then.

The system, made by Miami-based company Neocis, is designed to help dentists plan and perform dental implant surgery and make procedures faster and less invasive.

The device uses software and a 3D imaging system to help dentists locate nerves and plan the precise angle, position and depth of implants, while providing real-time visual guidance. The system also has an arm with a drill attached to help create the holes that the implants will go into.

Yomi is intended for most patients who need dental implants for missing teeth or other reasons. Pawlus said the robotic system can cut the procedure time by more than half.

“I still hold the exercise exactly the same as before, and move it up and down to the exact position where I normally would,” Pawlus said. “But once I put (the system) in guided mode, it only allows me to go exactly where (the implant) is supposed to go. It does not allow me to deviate or change angles.

“What (the system) provides me with is the stopping point and the angle,” he added.

The new robotic system comes as robotics is increasingly used in various medical fields to streamline procedures and make them less invasive.

Locally, Columbus Regional Health uses a variety of robots to assist with procedures, including several orthopedic procedures and “virtually all” gynecological procedures offered by the hospital system, according to its website.

Currently, it is unknown whether systems like Yomi will become more common in dental practices in the coming years. So far, only two dental practices in Indiana are using the system, according to a Neocis spokesperson. The other office is SmileCentric in Carmel.

The device has also been used by the New York University School of Dentistry.

“When (patients) first hear about it, yes, I think there can be a bit of anxiety just because they think the robot does everything,” Pawlus said. “…Once they start to understand that it just helps me and has all these huge benefits, then they’re a lot more open to it, a lot of that anxiety goes away. There are currently one million robotic surgeries performed each year in the medical industry, and it has become a standard of care.

“I have no doubt that this will definitely become the standard of care (in dentistry),” Pawlus added.